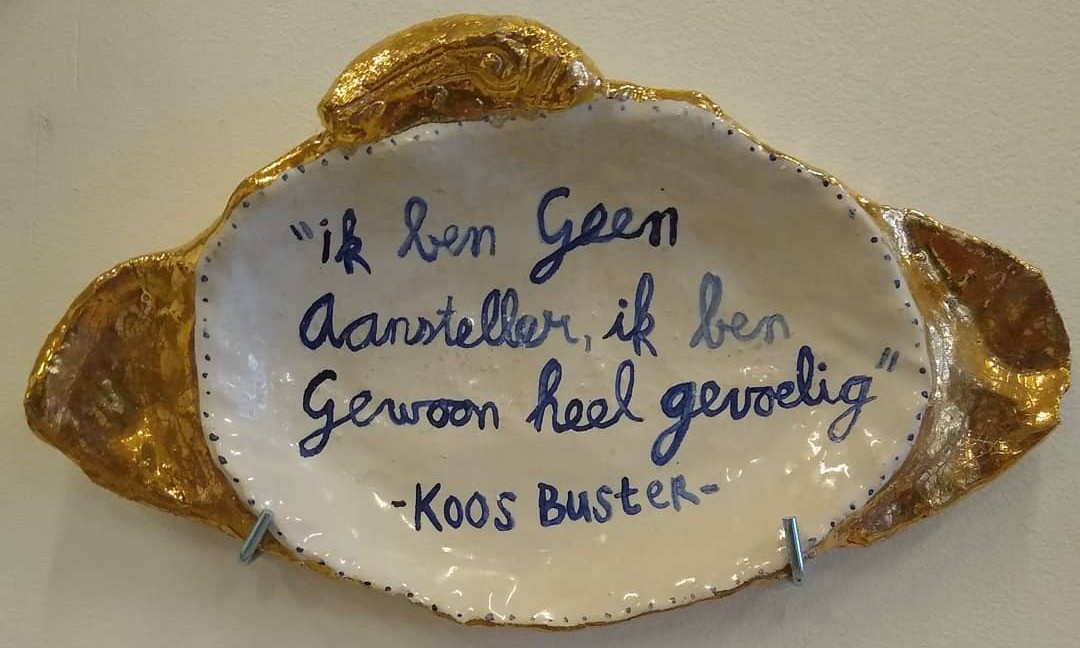 Koos Buster Stroucken was born in 1991 as the son of a mime player and a kindergarten teacher. The clay artist, as he calls himself, prefers to leave out his family name and for that reason he is better known as Koos Buster.

From 2013 to 2018 Koos Buster studies at the Gerrit Rietveld Academy in Amsterdam. During his first year of study, the artist is seduced by a material that offers him unlimited possibilities. Buster masters clay like a virtuoso and graduates in ceramics in 2018. In his graduation project he introduces the ‘Grote Koos Buster Museum’ (The Great Koos Buster Museum).

Initially it was Koos Buster's wish to follow in his father's footsteps and become a mime player! In the end he chooses clay as the medium to express himself as an artist. The talent for touching people is in his blood, which is clearly reflected in his oeuvre. With his visual work, Buster creates stories and theatre about trivial things. The artist gets people on the wrong track and makes them wonder.

He records ideas in a quick sketch. He likes to see the clumsy lines of this first drawing recur in his work. It is a necessity for Buster to honour imperfection. On the basis of his sketches, the artist works towards a ceramic finale in which the messiness and innocence of the first design must be preserved. Fingerprints created during the creative process remain deliberately visible in his finished sculptures. They are the silent testimony of the maker's kinetic energy. This results in rough, aged works of art with a twist of humour.

In this exhibition one is introduced to a selection from his series of ornamental plates in the typical Delft blue. Koos Buster enjoys honouring objects and traditions that are threatened with extinction or receive too little attention. However, his ornamental plates do not feature the traditional windmills, seagoing vessels and Delft cows. With great acumen he replaces these themes of yesteryear with all kinds of fun and less fun anecdotes. The artist also depicts everyday actions on the series of plates and formulates his own quotes mixed with a touch of irony. He uses this blue-and-white series in a clever way to, among other things, denounce embarrassing characters.

According to Buster, life is not a party, but you can take care of the party decorations yourself. For him, making art equals hanging garlands at his party. Through his artistry, Buster celebrates the trivial things in life and wants to encourage the viewer to reflect. In his work he is constantly on the lookout for contradictions, the perfect silliness or nonsense that requires a stage. The artist uses his gifts to put a smile on the spectator's face. Buster deliberately wants his works of art to be low-threshold and easily accessible. In this way he wants to allow as many people as possible from all walks of life to enjoy his childish madness.